After a few months of using this make-shift site, we are really happy to let you know we’ve launched our new revised website. You can access it at ocap.ca.

This website is no longer being updated and will be decommissioned shortly. 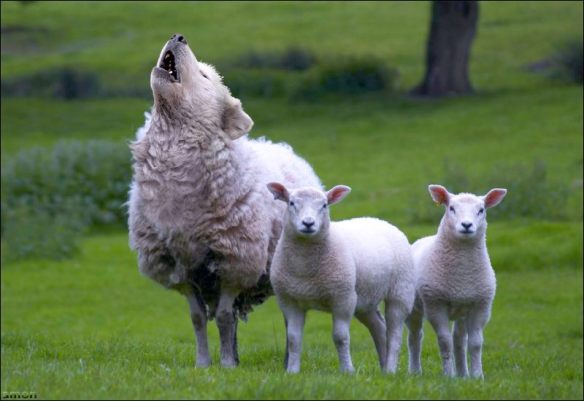 Statement for endorsement: We have drawn up the following statement on basic income (BI). It makes the case that, progressive hopes to the contrary notwithstanding, BI is being developed as a measure of neoliberal attack that should be opposed. We invite progressive organizations and individuals who hold positions in agencies and academic institutions, who agree with our arguments, to sign onto the statement. We hope that it will raise a voice of opposition and help develop information sharing and forms of co-operation among those, internationally, who reject the notion that basic income represents any kind realistic response to the neoliberal attack.

Endorsements and other responses can be directed to us at ocap@tao.ca.
—
The Neoliberal Danger of Basic Income
END_OF_DOCUMENT_TOKEN_TO_BE_REPLACED 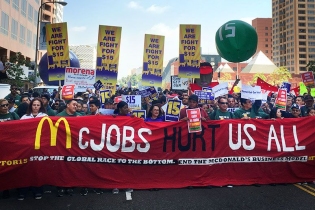 Free Event with a meal, childcare, wheelchair access and tokens.

Why is social assistance so low? What lessons can we learn from the fight to raise minimum wage? How do we win decent incomes for everyone? Join us at the September Speakers Series to find out.

Pam Frache is the Ontario Coordinator for the Fight for $15 and Fairness and an organizer with the Workers’ Action Centre. Previously, Pam has worked for the Ontario Federation of Labour and the Canadian Federation of Students. She is a long-time Toronto-based social justice and labour activist.

Yogi Acharya is an organizer with the Ontario Coalition Against Poverty and the Raise the Rates campaign.

The Speakers Series is a monthly event where we discuss issues critical to the success of poor people’s resistance. 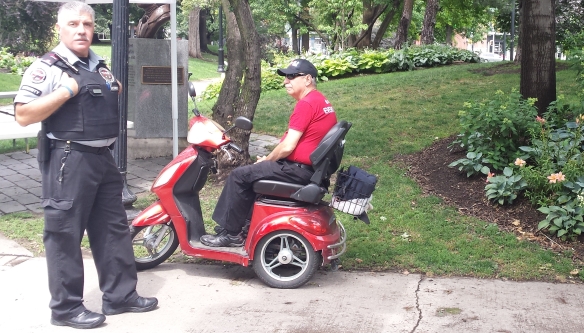 BIA security with Bob Kemp, “Streetscape Coordinator” for the BIA, in St.James Park

The St.Lawrence Market Business Improvement Area (the BIA) has hired private security that patrols the neighbourhood, and has become notorious for harassing poor and homeless users of St. James Park. The security guard ‘bans’ people from the area, enforces made-up rules (no sleeping in the park) and has become a symbol of fear, which is precisely the intent.

We learned about the situation mid-July from a currently homeless park user, Neil Mclellan, who called us while he was being threatened and illegally kicked off from the park gazebo by the guard. We notified the city, called the BIA and sent them a written letter to cease and desist from these practices. When the harassment continued, we issued a poster informing park users of their rights.

Instead of laying off, the BIA escalated the situation. They started confiscating posters OCAP had distributed to park users (which is theft) and threatened Neil with physical violence. Despite being told by the city to cease having security patrol the park, and interact with park users outside of the hours stipulated on their permit, the BIA continued with the status quo this Thursday.

So we are now releasing this statement and video publicly, with a warning to the BIA – back off and stop the illegal private policing of the park and the surrounding area, and the harassment of poor people. If you don’t immediately put an end to these illegal practices, we will start picketing all your member businesses, starting with the ones owned by your board of directors.

The city tells us that emergency shelters aren’t the solution to homelessness and the escalating rates of homeless deaths, housing is. So shelters are kept underfunded and overcrowded. At the same time, the city is boarding up hundreds of public (Toronto Community Housing Corporation) housing units, at a time when the demand for them far outstrips supply. Thousands of families are facing displacement and thousands more languish on the subsidized housing waiting-list with wait-times that now stretch over a decade. Meanwhile market rents continue their upward spiral and upscale redevelopment projects continue pushing poor people out of the downtown core.

We intend to build a formidable fight capable of facing off against these marauding housing profiteers and their lackeys in government. These neighbourhoods are ours and we refuse to be pushed, priced or policed out! We demand the following:

This summer has been an especially difficult one, we’ve lost a lot of people. Their lives have been lost not only to homelessness, but also to senseless policies of the so-called ‘war on drugs.’ So we come together, in the spirit of what Mother Jones once said, to mourn the dead and fight like hell for the living. Join us. 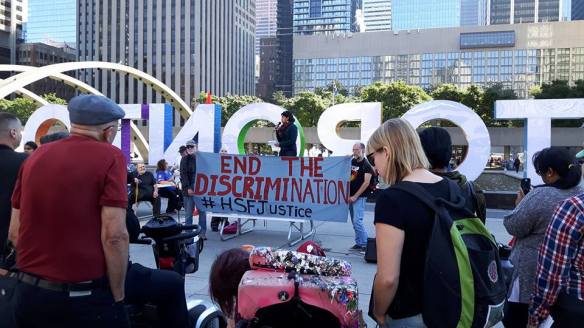 Many of you have been a part of the struggle to change the discriminatory policies underlying the Housing Stabilization Fund (HSF). To-date we have written two reports (accessible here and here) documenting in detail the issues with the HSF and its management. The outrage sparked by Laura Bardeau‘s case and the subsequent mobilization led to series of changes being announced by the City in December last year. Some of these changes were implemented immediately, such as the abandoning of the discriminatory eligibility formula, whereas others, we were promised, would be designed in consultation with us and other community advocates and legal clinics.

The consultation did not happen and instead TESS merely notified us, by way of a poorly organized ‘information session’ on June 28, of the changes it had already designed and which would go into effect a mere 3 business days later (on July 4). Now a coalition of 18 organizations, OCAP included, have penned an open letter to the Mayor and members of the Community Development and Recreation Committee outlining the issues with the changes and the resolutions we are seeking. The letter appears below.

OCAP has also prepared our own assessment of all the changes to the HSF. You can download it here.
END_OF_DOCUMENT_TOKEN_TO_BE_REPLACED

We’ve created a new flyer explaining the basics of Basic Income and what Ontario’s pilot means for disabled people. Download the flyer here: Front | Back 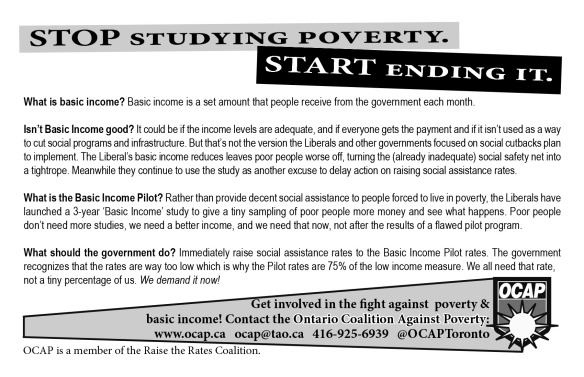 END_OF_DOCUMENT_TOKEN_TO_BE_REPLACED

What it Shows and What it Misses

The Toronto Ombudsman’s report opens by acknowledging that its enquiry was prompted by a CBC interview with Cathy Crowe, ‘a well known social activist and street nurse about Toronto’s cold weather response for people who are homeless.’ The interview dealt with inadequate levels of shelter provision and looked at the need for the federal armouries to be opened in order to respond to this. Given that the media interview that prompted the enquiry raised issues around the inadequacy of the overall shelter system, it’s curious that the Ombudsman chose to limit deliberations to the back-up cold weather drop-ins. In fact, it’s actually rather worrying that this choice was made because it happens to be a rather useful one for Shelter Support and Housing Administration (SSHA) officialdom and the agenda they are pursuing.
END_OF_DOCUMENT_TOKEN_TO_BE_REPLACED

Join us as we discuss these and other questions that look at the connections between disability and poverty in our society, and what that means for our struggles.

Speaker: A.J. Withers, author and organizer
A.J. Withers is a long time disability and anti-poverty organizer with OCAP. They are the author of Disability Politics and Theory, stillmyrevolution.org, and the forthcoming book A Violent History of Benevolence: Interlocking Oppression and the Moral Economies of Social Working (with Chris Chapman).

The monthly speakers series focuses on topics central to poor people’s issues and organizing. A new topic is presented every month and all events are open to the public. Come on out, invite your friends and please share widely! 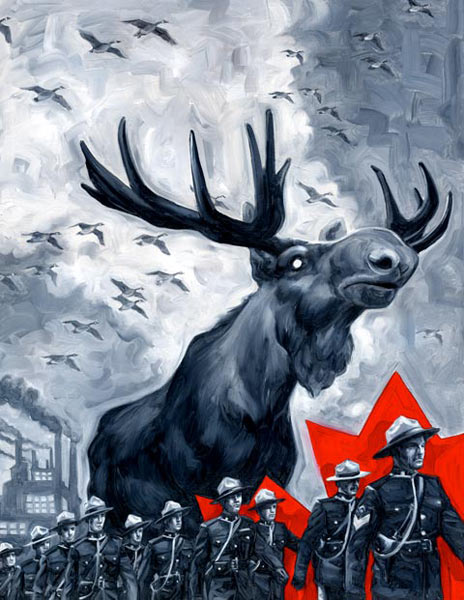 Hardly anyone who attends the Speakers Series will be surprised that Canada’s benevolent self-image crumbles when confronted with reality. But exactly what the carefully crafted ‘Canadian’ brand masks is worth discussing. The June Speakers Series will do just that, unraveling along the way the connections between the war on the poor at home and abroad.

Todd is the author of Imperialist Canada and co-author of Blood of Extraction: Canadian Imperialism in Latin America. He is also a member of the Toronto New Socialists and is involved in the Organizing Committee Against Islamophobia.

The monthly speakers series focuses on topics central to poor people’s issues and organizing. A new topic is presented every month and all events are open to the public. Come on out, invite your friends and please share widely!

OCAP is a direct-action anti-poverty organization based in Toronto, Ontario, Canada. We mount campaigns against regressive government policies as they affect poor and working people. In addition, we provide direct-action advocacy for individuals against welfare and ODSP, public housing and others who deny poor people what they are entitled to. We believe in the power of people to organize themselves. We believe in the power of resistance.

Our usual website is currently down because of issues with our web-host. It might take a few months for the original site to be back up. In the meantime we’ve setup this temporary website to post updates on actions and events. We’ve set it up so that you can access it by typing in our usual ocap.ca web address. Thank you for your patience.
Ontario Coalition Against Poverty
Blog at WordPress.com.
Loading Comments...
%d bloggers like this: